Okładka i fragment książki „The Institute” 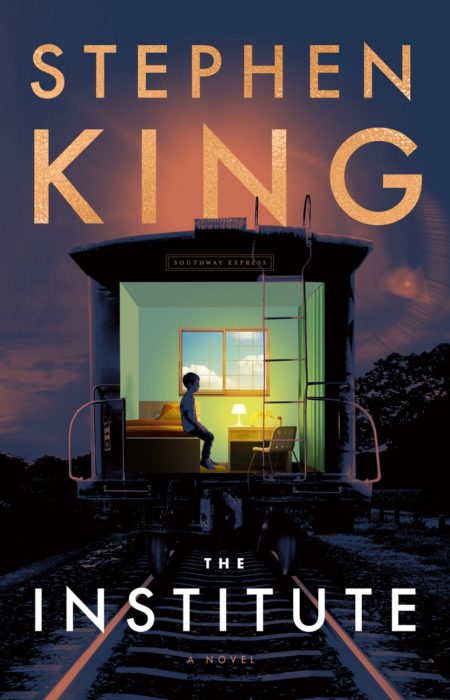 With the essay included, the SAT test lasted four hours, but there was a merciful break in the middle. Luke sat on a bench in the high school’s lobby, munching the sandwiches his mother had packed for him and wishing for a book. He had brought Naked Lunch, but one of the proctors appropriated it (along with his phone and everyone else’s), telling Luke it would be returned to him later. The guy also riffled through the pages, looking either for dirty pictures or a crib sheet or two.

While he was eating his Snackimals, he became aware of several other test-takers standing around him. Big boys and girls, high school juniors and seniors.

“Kid,” one of them asked, “what the hell are you doing here?”

They considered this. One of the girls said, “Are you a genius? Like in a movie?”

“No,” Luke said, smiling, “but I did stay at a Holiday Inn last night.”

They laughed, which was good. One of the boys held up his palm, and Luke slapped him five. “Where are you going? What school?”

“MIT, if I get in,” Luke said. Which was disingenuous; he had already been granted provisional admission to both schools of his choice, contingent on doing well today. Which wasn’t going to be much of a problem. So far, the test had been a breeze. It was the kids surrounding him that he found intimidating. In the fall, he would be in classes filled with kids like these, kids much older and twice his size, and of course they would all be looking at him.

One of the girls—a pretty redhead—asked him if he’d gotten the hotel question in the math section.

“The one about Aaron?” Luke asked. “Yeah, pretty sure I did.”

“What did you say was the right choice, can you remember?”

The question had been how to figure how much some dude named Aaron would have to pay for his motel room for x number of nights if the rate was $99.95 per night, plus 8% tax, plus an additional one-time charge of five bucks, and of course Luke remembered. It was a slightly nasty question because of the how much factor. The answer wasn’t a number, it was an equation.

“Excellent equation,” Luke said, “but that’s how the people who make these tests screw you at the drive-thru.” He tapped her equation. “Yours only reflects a one-night stay. It also doesn’t account for the room tax.”

“It’s okay,” Luke said. “You probably got the rest of them.”

“Maybe you’re wrong and she’s right,” one of the boys said. It was the one who’d slapped Luke five.

She shook her head. “The kid’s right. I messed up the fucking tax. I suck.”

Luke watched her walk away, her head drooping. One of the boys went after her and put an arm around her waist. Luke envied him.

One of the others, a tall drink of water wearing designer glasses, sat down next to Luke. “Is it weird?” he asked. “Being you, I mean?”

One of the proctors leaned out and rang a hand bell. “Let’s go, kids.”

Luke got up with some relief and tossed his lunch sack in a trash barrel by the door to the gym. He looked at the pretty redhead a final time, and as he went in, the barrel shimmied three inches to the left.