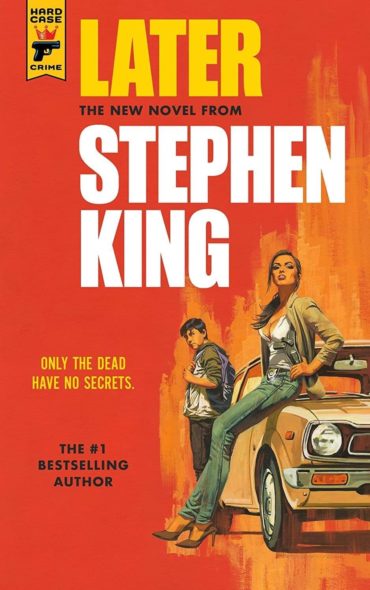 We went up the stairs to the third floor, where there were two other apartments plus ours at the end of the hall. Ours was the fanciest one. Mr. and Mrs. Burkett were standing outside 3A, and I knew right away something was wrong because Mr. Burkett was smoking a cigarette, which I hadn’t seen him do before and was illegal in our building anyway. His eyes were bloodshot and his hair was all crazied up in gray spikes. I always called him mister, but he was actually Professor Burkett, and taught something smart at NYU. English and European Literature, I later found out. Mrs. Burkett was dressed in a nightgown and her feet were bare. That nightgown was pretty thin. I could see most of her stuff right through it.

Before he could say anything back, I showed him my turkey. Because he looked sad and I wanted to cheer him up, but also because I was so proud of it. “Look, Mr. Burkett! I made a turkey! Look, Mrs. Burkett!” I held it up for her in front of my face because I didn’t want her to think I was looking at her stuff.

Mr. Burkett paid no attention. I don’t think he even heard me. “Tia, I have some awful news. Mona died this morning.”

My mother dropped her bag with the manuscript inside it between her feet and put her hand over her mouth. “Oh, no! Tell me that’s not true!”

He began to cry. “She got up in the night and said she wanted a drink of water. I went back to sleep and she was on the couch this morning with a comforter pulled up to her chin and so I tiptoed to the kitchen and put on the coffee because I thought the pleasant smell would w-w-wake…would wake…”

He really broke down then. Mom took him in her arms the way she did me when I hurt myself, even though Mr. Burkett was about a hundred (seventy-four, I found out later).

That was when Mrs. Burkett spoke to me. She was hard to hear, but not as hard as some of them because she was still pretty fresh. She said, “Turkeys aren’t green, James.”

Mr. Burkett said, “I called Dr. Allen and he came and said she probably had a soak.” At least that’s what I thought he said. He was crying so much it was hard to tell. “He called the funeral parlor. They took her away. I don’t know what I’ll do without her.”

Mrs. Burkett said, “My husband is going to burn your mother’s hair with his cigarette if he doesn’t look out.”

And sure enough, he did. I could smell the singeing hair, a kind of beauty shop smell. Mom was too polite to say anything about it, but she made him let go of her, and then she took the cigarette from him and dropped it on the floor and stepped on it. I thought that was a groady thing to do, extreme litterbugging, but I didn’t say anything. I got that it was a special situation.

I also knew that talking to Mrs. Burkett any more would freak him out. Mom, too. Even a little kid knows certain basic things if he’s not soft in the attic. You said please, you said thank you, you didn’t flap your weenie around in public or chew with your mouth open, and you didn’t talk to dead folks when they were standing next to living folks who were just starting to miss them. I only want to say, in my own defense, that when I saw her I didn’t know she was dead.

Later on I got better at telling the difference, but back then I was just learning. It was her nightgown I could see through, not her. Dead people look just like living people, except they’re always wearing the clothes they died in.

Meanwhile, Mr. Burkett was rehashing the whole thing. He told my mother how he sat on the floor beside the couch and held his wife’s hand till that doctor guy came and again till the mortician guy came to take her away. “Conveyed her hence” was what he actually said, which I didn’t understand until Mom explained it to me. And at first I thought he said beautician, maybe because of the smell when he burned Mom’s hair. His crying had tapered off, but now it ramped up again. “Her rings are gone,” he said through his tears. “Both her wedding ring and her engagement ring, that big diamond. I looked on the night table by her side of the bed, where she puts them when she rubs that awful-smelling arthritis cream into her hands—”

“It does smell bad,” Mrs. Burkett admitted. “Lanolin is basically sheep dip, but it really helps.”

I nodded to show I understood but didn’t say anything.

“—and on the bathroom sink, because sometimes she leaves them there…I’ve looked everywhere.”

Mrs. Burkett flapped a hand in front of her face. “I give him six weeks before he’s asking Dolores Magowan out to lunch.”

Mr. Burkett was blubbing, and my mother was doing her soothing thing like she did to me whenever I scraped my knee or this one time when I tried to make her a cup of tea and slopped hot water on my hand. Lots of noise, in other words, so I took a chance but kept my voice low.

“Where are your rings, Mrs. Burkett? Do you know?”

They have to tell you the truth when they’re dead. I didn’t know that at the age of six; I just assumed all grownups told the truth, living or dead. Of course back then I also believed Goldilocks was a real girl. Call me stupid if you want to. At least I didn’t believe the three bears actually talked.

“Top shelf of the hall closet,” she said. “Way in the back, behind the scrapbooks.”

“Why there?” I asked, and my mother gave me a strange look. As far as she could see, I was talking to the empty doorway…although by then she knew I wasn’t quite the same as other kids. After a thing that happened in Central Park, not a nice thing—I’ll get to it—I overheard her telling one of her editor friends on the phone that I was “fey.” That scared the shit out of me, because I thought she meant she was changing my name to Fay, which is a girl’s name.

“I don’t have the slightest idea,” Mrs. Burkett said. “By then I suppose I was having the stroke. My thoughts would have been drowning in blood.”

Thoughts drowning in blood. I never forgot that.

Mom asked Mr. Burkett if he wanted to come down to our apartment for a cup of tea (“or something stronger”), but he said no, he was going to have another hunt for his wife’s missing rings. She asked him if he would like us to bring him some Chinese take-out, which my mother was planning for dinner, and he said that would be good, thank you Tia.

My mother said de nada (which she used almost as much as yeah yeah yeah and right right right), then said we’d bring it to his apartment around six, unless he wanted to eat with us in ours, which he was welcome to do. He said no, he’d like to eat in his place but he would like us to eat with him. Except what he actually said was our place, like Mrs. Burkett was still alive. Which she wasn’t, even though she was there.

“By then you’ll have found her rings,” Mom said. She took my hand. “Come on, Jamie. We’ll see Mr. Burkett later, but for now let’s leave him alone.”

Mrs. Burkett said, “Turkeys aren’t green, Jamie, and that doesn’t look like a turkey anyway. It looks like a blob with fingers sticking out of it. You’re no Rembrandt.”

Dead people have to tell the truth, which is okay when you want to know the answer to a question, but as I said, the truth can really suck. I started to be mad at her, but just then she started to cry and I couldn’t be. She turned to Mr. Burkett and said, “Who’ll make sure you don’t miss the belt loop in the back of your pants now? Dolores Magowan? I should smile and kiss a pig.” She kissed his cheek…or kissed at it, I couldn’t really tell which. “I loved you, Marty. Still do.”

Mr. Burkett raised his hand and scratched the spot where her lips had touched him, as if he had an itch. I suppose that’s what he thought it was.